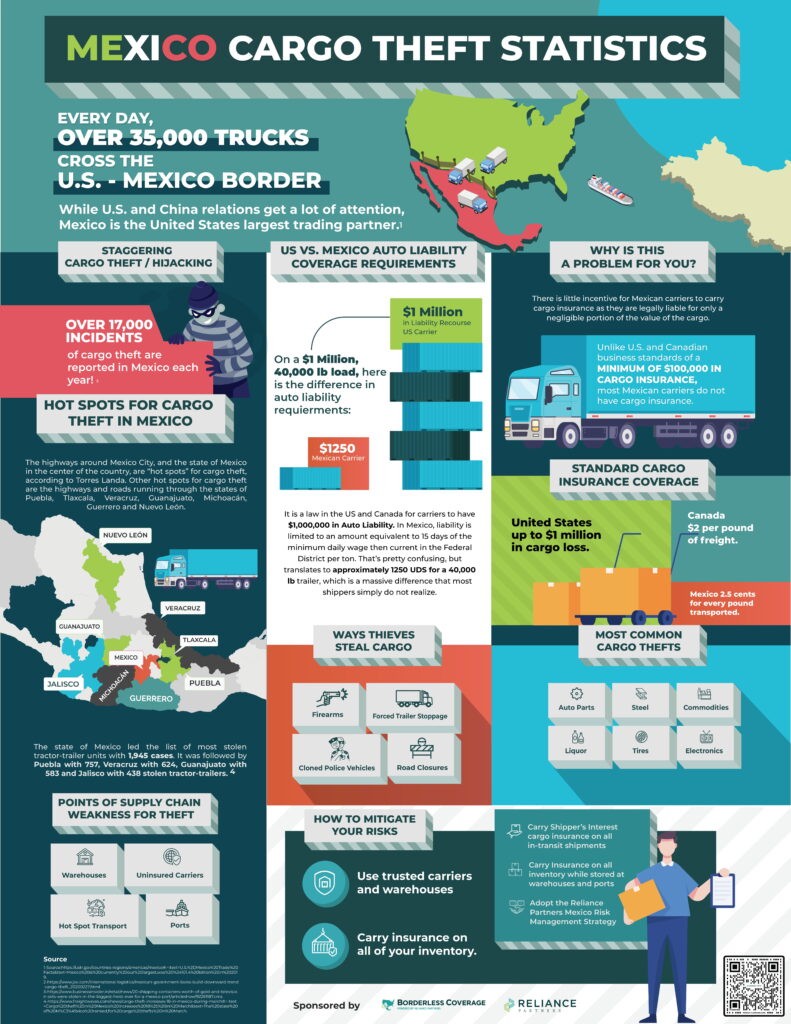 The potential for lucrative foreign investment tempered by concern about crime is shaping Mexico’s future in a peculiar way.

From a glass-half-full perspective, nearshoring and an influx of manufacturing have bolstered Mexico’s economic prospects.

Forbes reports that Mexico garnered $11.9 billion in foreign direct investment during the first quarter of 2021, the largest amount recorded since the country began tracking FDI in 1999.

However, the glass is also half empty. Cargo theft persists in “hot spots” across Mexico.

In March, the state of Mexico, in the central region of the country, ranked first in cargo thefts with 465 cases. That was a 39% year-over-year increase from March 2021. The state of Mexico was also where the most tractor-trailers were stolen — 1,945 from April 2021 to March 2022. Other hot spots included Puebla, Veracruz, Guanajuato and Jalisco.

In June, the Port of Manzanillo in Jalisco was victim to perhaps the largest heist ever to strike the port. Thieves stole 20 shipping containers loaded with gold, silver ore and televisions.

As the country stands at a crossroads of crime and prosperity, don’t be caught in the crosshairs of the turmoil.

“Mexico is a fantastic trading partner, but the risk of cargo theft when shipping is astronomical and can be catastrophic,” warns Mark Vickers, Reliance Partners’ executive vice president of international logistics.

Noting that over 17,000 incidents of cargo theft are reported in Mexico each year, Vickers adds, “There is little recourse for companies that do not practice proper risk management by carrying cargo insurance.

“Many small and medium-sized businesses moving freight into Mexico don’t have any insurance at all and typically don’t have any type of good risk management strategy in Mexico. So if a shipment of theirs worth $50,000 is hijacked, the business could be in trouble.”

Of the 35,000 trucks that cross the U.S.-Mexico border every day, Vickers estimates that 95% of the shipments aren’t insured at all. This is largely due to the assumption that Mexican carriers have equitable insurance standards. Unfortunately, that isn’t so.

Mexican carriers seldom carry cargo insurance, and if they do, it’s not worth much.

Reliance Partners notes that while standard cargo insurance in the U.S. covers up to $1 million in losses and coverage is $2 per pound in Canada, only 2.5 cents per pound is covered in Mexico. Thankfully, shippers no longer have to take this risk. With Reliance Partners’ Borderless Coverage program, shippers can enter Mexico with confidence.

Borderless provides All-Risk, Shipper’s Interest Cargo Insurance for both standard and high-value Mexico and international shipments on a per-shipment or per-project basis from the moment of pickup until final delivery, regardless of mode.

“The first thing I ask my clients is what their Mexican risk management program looks like? Most of them don’t even have one,” Vickers said.

“We feel it’s most important that shippers and 3PLs are only using CTPAT-certified carriers,” Vickers said. “A CTPAT certification typically checks most of the boxes for what we’re looking for in a gold standard motor carrier in Mexico.”

Risk can further be mitigated through stricter security measures for high-risk commodities, especially if shipments will pass through ports and regions notorious for crime.

Reliance Partners notes that electronics, steel, auto parts, tires and liquor are some of the most commonly targeted items.

While cargo theft can’t be eliminated entirely, the risk can be greatly reduced with the right insurance in place.

Vickers recommends utilizing Shipper’s Interest Cargo Insurance on all in-transit shipments and insuring all inventory stored at warehouses and ports.

“If a company has our insurance in place with real-time visibility, selects only CTPAT carriers, and implements a good carrier vetting and risk management strategy with proper security protocols based on the value of each commodity, they should feel pretty darn comfortable in handling business in Mexico,” Vickers said.

To learn more about usage-based cargo insurance when transporting goods, reach out to Borderless Coverage for a one-time or annual policy quote.